We'd hoped for good weather to take the kayak along with all the hangers-on down to Stratford Upon Avon for the day. To picnic lazily on the grass and paddle hungrily along the river was plan A.

The forecast put paid to that though so in the end it was just my son and I who made the trip. With only the two of us for the afternoon I threw a rod on board as there was something I was keen to try.

We will soon be taking a holiday on the East coast and I for one have a hankering for a sea bass. It's a fish I've never caught despite 'having a go' on a number of previous occasions. Half expecting it to be a fruitless enterprise once again I thought I should not pin all my tails on the one donkey and also take along a light lure outfit for shits and giggles. My intention is to work tiny worm like soft lures from the boat in the sea as I'm thinking most fish that swim will bite a short wriggly thing. To give this method a whirl I'd rigged up a drop shot rig to take to the Warwickshire Avon with us.

Now my Max has fished before but always with me lending the guiding hand. On this outing though we'd each done as much drop-shotting as one another - zip. In fact him perhaps more than me as he took great pleasure in informing me that drop-shotting was a much maligned COD gaming stunt pulled by PC gamers. I surprise myself that I even recalled that much of what he said before glazing over.

Once we'd paddled down to above the weirs in town we rested against barrages and I put up the rod. It was Max who spotted the fry in the water so I put on a silvery paddle tail thing about two inches long. This was fished about six inches above a 2XSSG shot.

Bets were placed on whether we'd catch anything and how long it would take. He has this bizarre faith in my angling ability and so plumped for less than five minutes whilst I took the safe bet of greater than five minutes. I'm no lure fisherman.

I kicked off proceedings with a gentle lob to the middle of the river whilst Max marked the time and as soon as I started the retrieve I had a nibble. All of a fluster I wound in to check the hook wasn't blinded and cast out again. Same again, within four turns of the reel I had a small perch attached which was swung aboard.

One minute. That's how long it took to catch something on a drop shot. 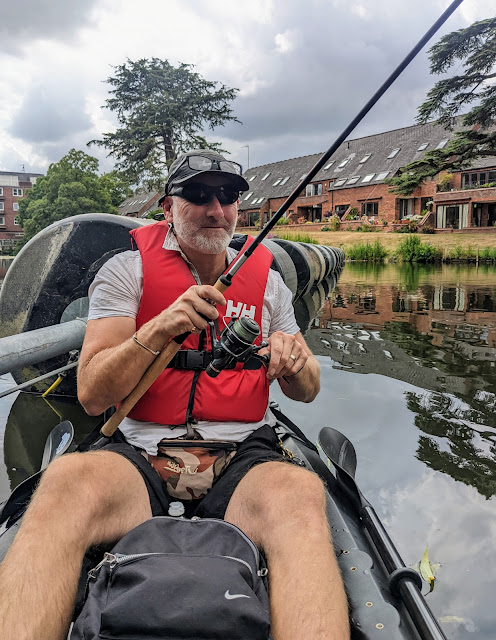 We celebrated enthusiastically until I remembered I'd just lost a quid. I caught a few more then it was his go. 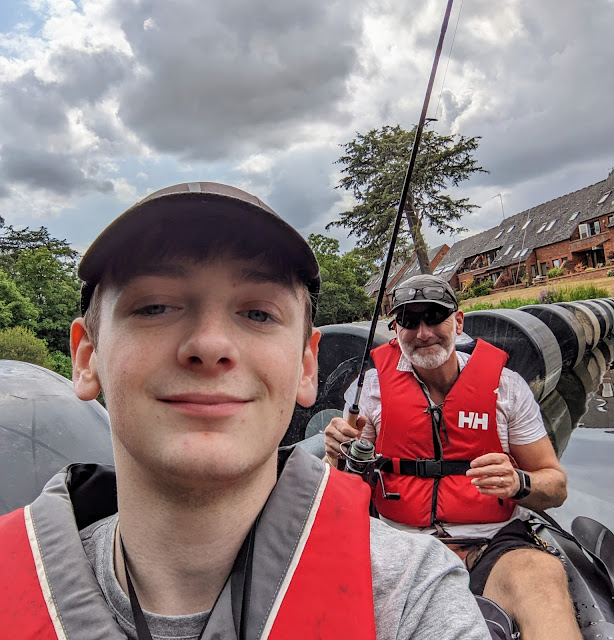 It took a few goes for him to get the hang of casting but within ten minutes of picking up the rod he was fishing just as well as I was.
He too had a handful of perch in that first spot until finally I wrestled the rod back off him with the enticement of snacks - every teenagers weak spot.
It was on my second try of the new technique I hooked a chublet. 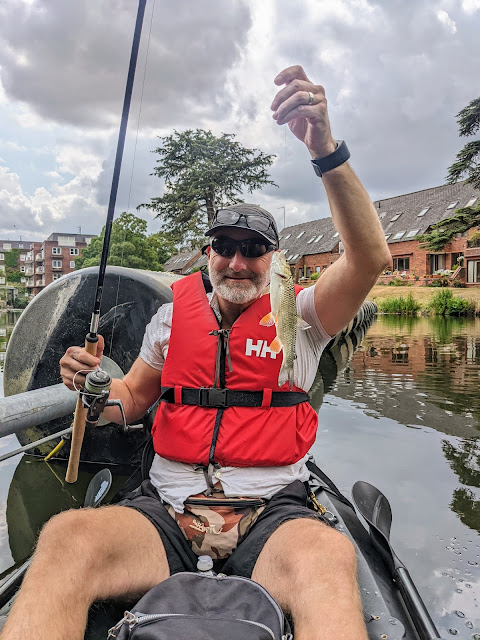 And that was how we spent our afternoon. We meandered back upstream with me mostly gillying for him. I'd be on the oars looking out for perchy looking holes and cover whilst he fished from the front of the boat. I quite got the hang of sculling the oar to edge us sideways or ease us over good water. 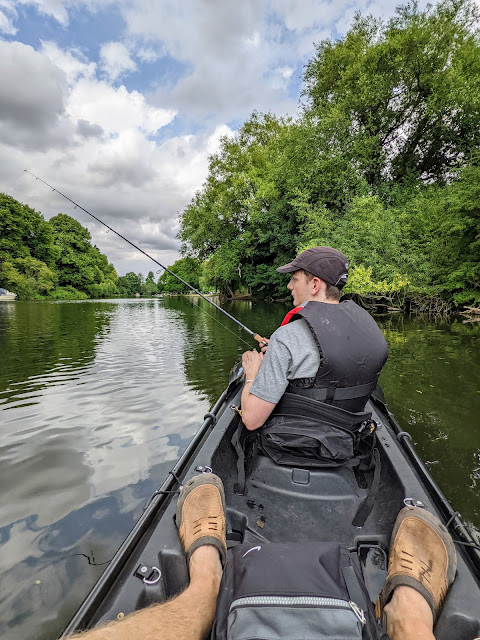 We chatted about varying the retrieve to find out what they wanted on the day, fast or slow, and about drop-offs as ambush points and the value of cover of an overhanging tree to a fish with no eyelids.
To be honest it was absolutely joyous. Time spent in fantastic company, sharing my sport with him and reveling in watching him fish.
He caught the biggest perch of the day from the deeps below the 'Swan's Neck' S-bend. Nothing massive, say as big as your hand. Hilarity ensued when he realised the bigger the perch the spinier the dorsal and the prick became the pricked. Of course he dropped the fish before I could take a photo of it but who cares. Happy days indeed. 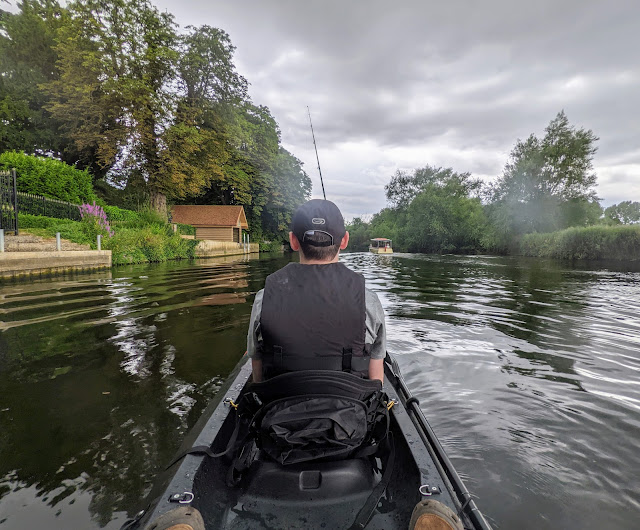