It feels like summer's here, and with the thousand (post-COVID) things to do which are not fishing my last two trips have been about relaxation rather than specimen hunting.

Thankfully, The Killers, BBC Big Weekend, Platinum Jubilee parties and circumnavigating the Isle of Wight on bikes will all be memories come June 16th. Inhale the countryside right now and the scent of ground elder tells you the rivers will soon be open once again. Happy days. 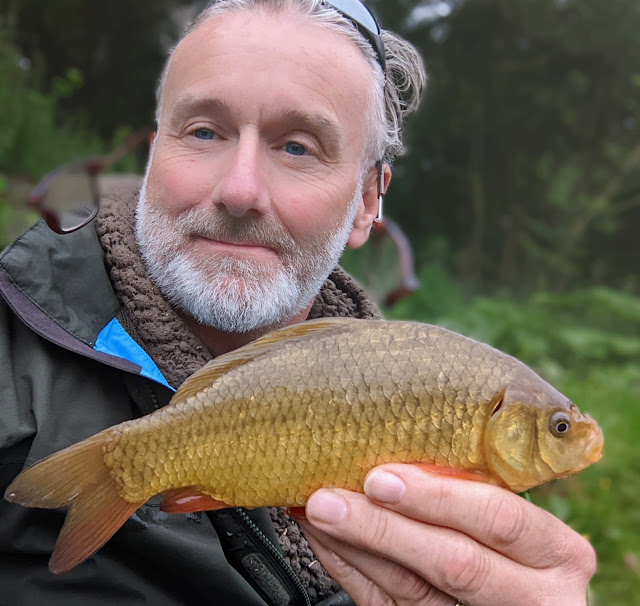 I've been paying visits to the Anker during the close season, not as many as I'd hoped perhaps but enough to keep the old appetite whetted. The swims I finished last season in are now truly unrecognisable in terms of bankside vegetation and weed growth in the river. My compadre Ade has been out and about too and was lucky enough to spot barbel displaying spawning behaviour earlier this spring.

Last nights session was most definitely on still water and after failing to catch a crucian carp in the Riddings crucian pool recently I headed to Wykin Fishing's golf course pools where I know some live.

Armed with only my float rod, some left over groundbait and three baits to try on the hook I fished as close as I dare to the bankside cover. I fed very little (for me) to try and not grab the attention of the Brutus King carp which were boshing about and soaking up the warmth in the upper layers. I rotated through bread punch, sweetcorn and cheese paste as baits in an attempt to determine if the crucians had a favourite... and they did! 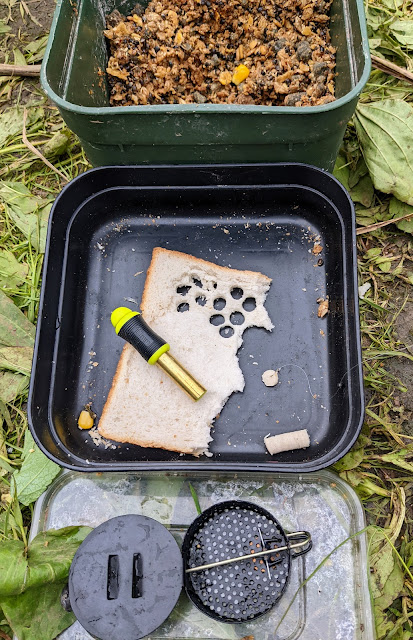 Before I get to the results of my test I wanted to first tell you about my new toy - a Matrix compression bread punch. They come in packs of three but I've only been using the 10mm version to date; last week on the canal and yesterday evening.
The idea is ingenious and simple to use. You punch out about ten discs from the bread which each disappear up the metal barrel as you go. Once you have the ten discs in the barrel you find a flat surface and press down on the plunger which by now is sticking out of the top of the barrel. You can see the result in the photo below, a lovely cylinder of compressed discs which initially sink in water but once wet fluff up to about the size of a pea completely concealing the hook. 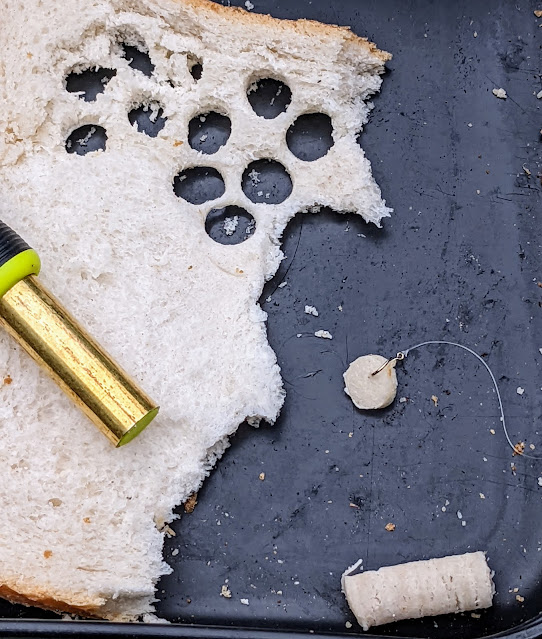 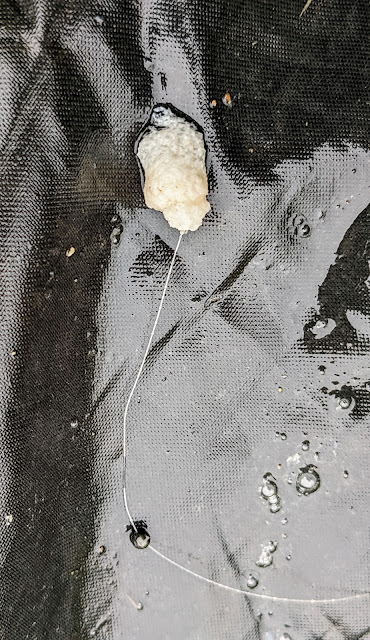 I realise this might not be new news to some of you but it's the first time I've used one and could already see it's running water potential for roach and chub. 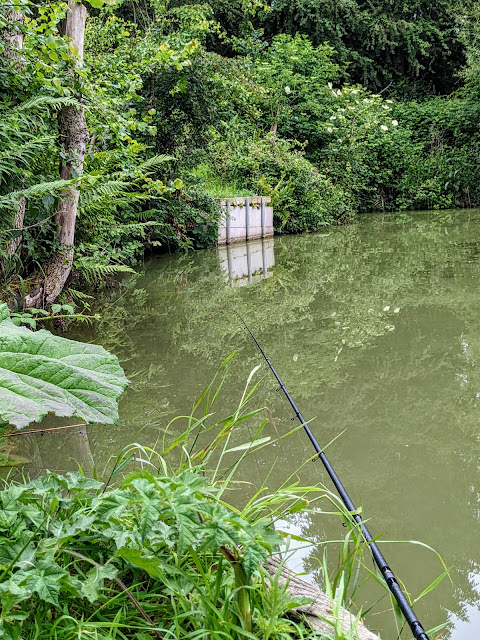 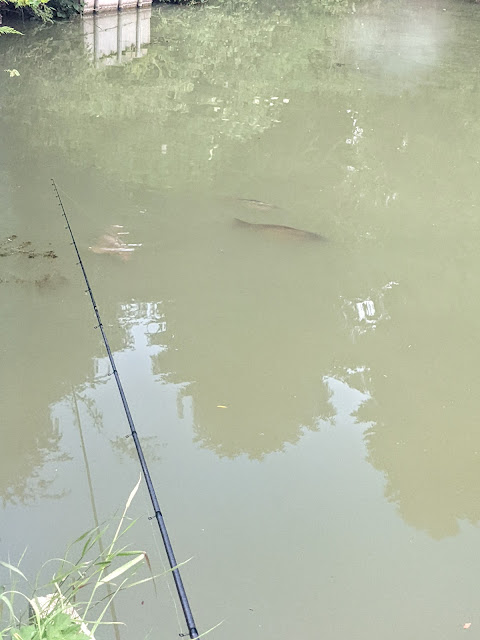 So back to my test and what did I discover?
The bread punch definitely and unsurprisingly got the most interest. I caught mainly roach on it and had the smallest fish of the session when using this bait. Bread as a bait is like that though isn't it? Size of the bait does not put fish off. I think you could chuck a whole bloomer loaf into a pool and fish of all shapes and diminutions would be hitting and pecking at it as every flake is a morsel of food to them.
I thought sweetcorn was going to be my winner on the day catching an early crucian carp followed later by another amongst the better stamp of roach it was pulling in. 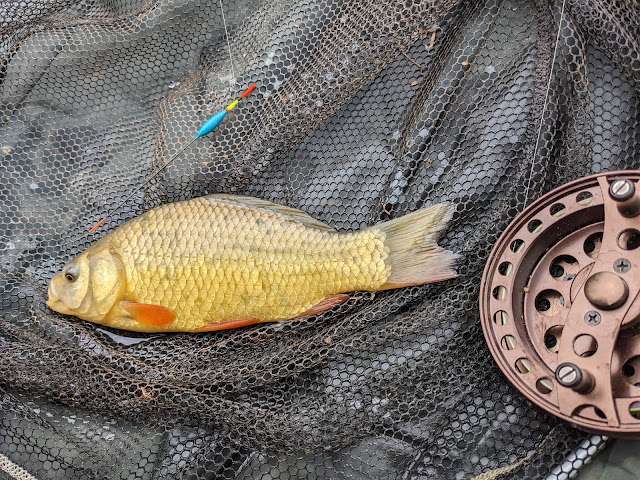 But no, a pea-sized blob of cheese paste proved to be the go to bait for this pools golden side plates. Catching five crucians in the session and no roach or skimmers either and with only blot on it's copybook by dint of a single king carp the cheesy molded blob ruled supreme. 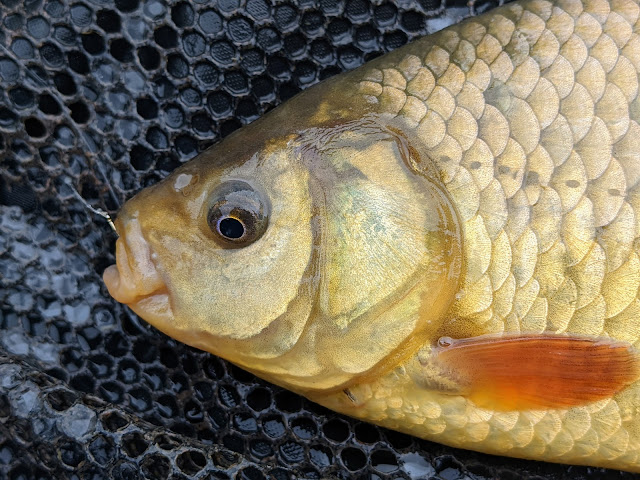 Amongst the king carp cruising around were some distinctly coloured fish. Mid-session I removed my lowermost shot, surface fed a little crust from the edges of my meager five slices I had with me and allowed myself the challenge of 'only catching the pretty ones'.
Dangled bread off the end of a fifteen foot rod were these beauties downfall. 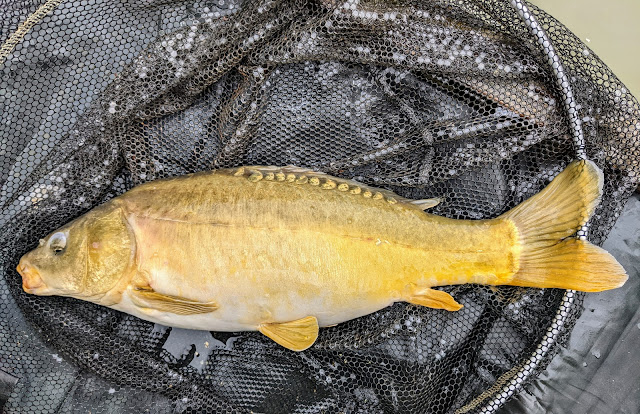 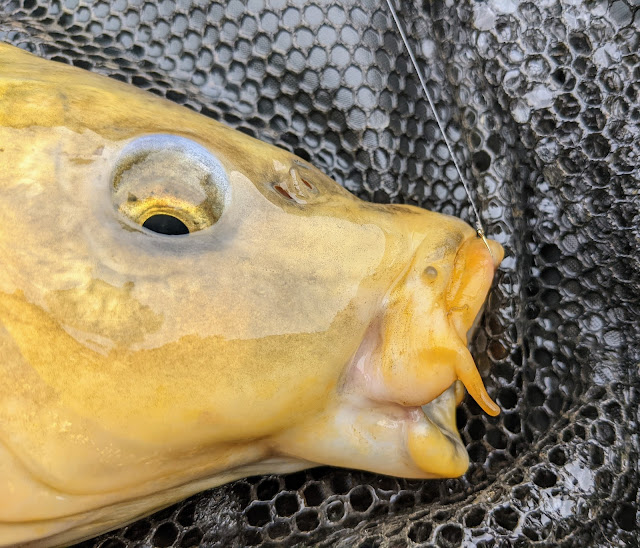 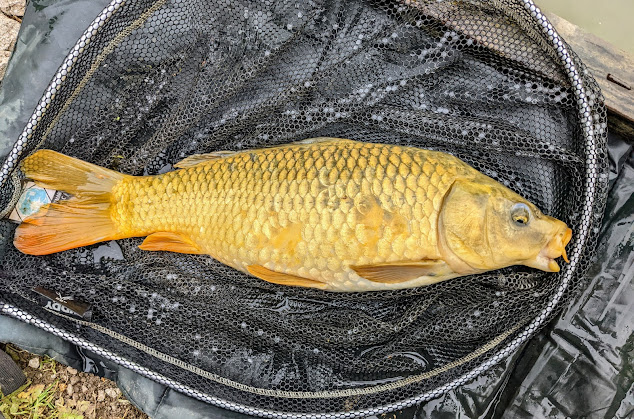