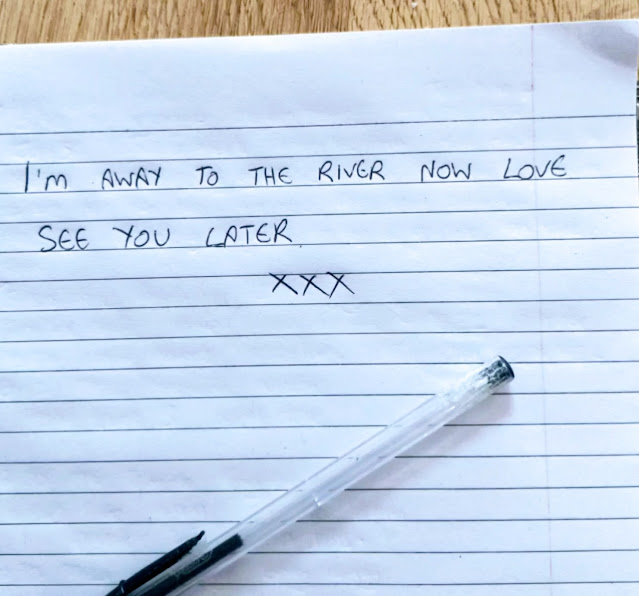 Like a child waiting for Christmas I was during early June.

My trips to the river to feed it and to try and spot my ultimate Anker adversary the barbel continued in the run up to the fishing season opening. Being next to the water without a rod in my hand was like gawping through a Ferrari garage window without possessing a driving license. Frustrating.

I was off work on June 16th but had committed to doing some jobs around the house before I scarpered. And boy did I have to push it down. I've no recollection of what those jobs even were now but I distinctly remember the frustrating feeling of anything which did not go exactly to plan in the most expedient fashion. I was fit to burst come lunchtime.

And then away, to the middle reaches of the river with expectations sky high and a spring in my step.

My first cast of the season was probably the most prepared I'll ever be this year. For months I'd been acquiring bits and bobs for my fishing waistcoat so as not to have to remember to transfer things from my tackle bag into it when I'm off for a days roving. I had a new folding landing net purchased on a whim when the predator gear sales hit the internet around March and I'd been marinating my luncheon meat since spring.

I've had three trips to running water since the gates were unlocked and the majority of that time has been spent on ones feet and staying on the move covering ground. We've had some very bright and warm weather up here in sunny Nunny meaning I've sought shady tree tunnels and depth wherever I can find it. Clear water shallow glides are great to look at but are often devoid of fish in the midday sun of June. 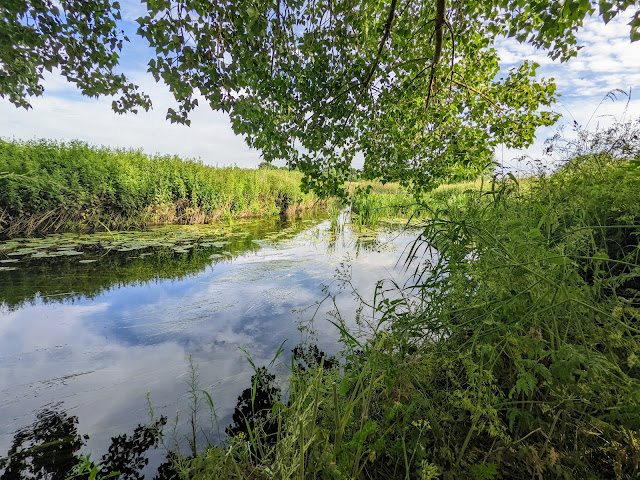 The first major observation thus far is how much of the Anker's riverbank is now impenetrable because of wild undergrowth. Swims which looked the part in late winter are now hidden behind a sea of nettles and tall grass. The same can be said for the river bed, once clean-bottomed and flowing with purpose those same swims are now festooned with streamer weed and almost static. It's a different river in summer that's for sure.
Whilst roving about my main thrust has been getting to grips with rolling some meat about. I use 'rolling' in the loosest sense of the term as in the majority of swims there has not been enough flow to knock a minnow off course let alone impart any speed on to a cube of meat. In most cases I've been using whatever flow is there to allow a shallow bow to build on the mainline before raising the rod tip slightly whilst paying out a little line - enough for the meat to just edge down the swim. This I way I can bump the bait down the swim, nice and slowly.
After whiling away the afternoon hours exploring a stretch (or sometimes stretches) like this I will then plump on what in my opinion is the most attractive swim for a barbel on the day, attach a lead and fish a static bait over some free offerings until home time.
I've yet to fish into proper darkness given the late hour of sunset.
Like when using any new technique - in this case rolling meat - there is the initial expectation of immediate success quickly followed by the protracted doubt you're not doing it right hopefully followed by that first bite out of the blue.
In was on that first afternoon I received that first bite to the mobile meat buffet thankfully meaning the period of protracted doubt was short lived.
A 3lb 7oz chub obliged me and got me off to a start. 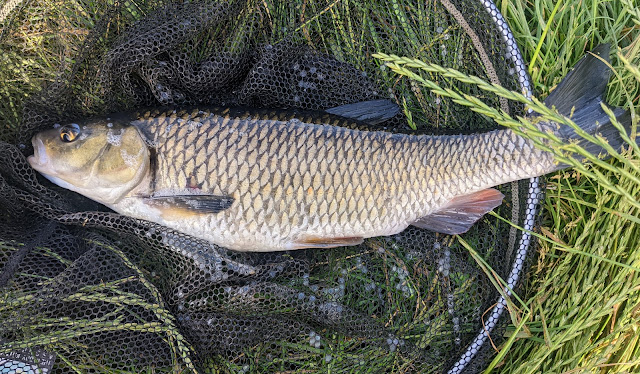 Having by now covered almost this entire stretch my legs were on fire as I was wearing shorts and yet still persevered in trying to reach those 'out of the way' spots I'd registered earlier in the year. I was stung to fuck. 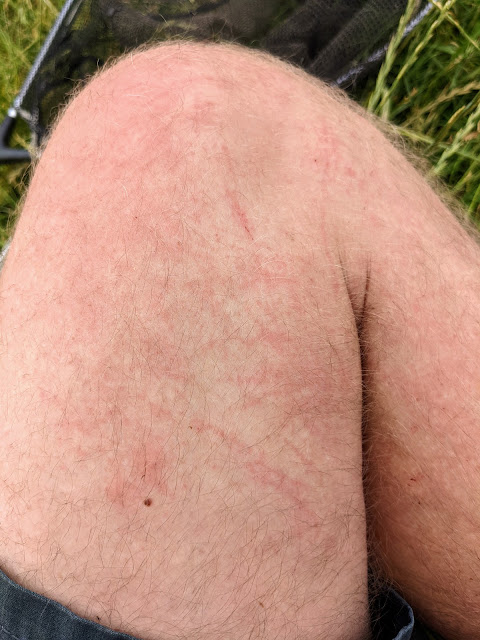 For my second outing I ventured further downstream in an attempt to find some much sought after flow but again was greeted with much weed.
The photo below extolls the biggest virtue of moving the meat. Ordinarily I would pass by a swim like this thinking there was nowhere to swing my lead without it becoming fouled, yet also thinking it has potential. I've fished quite a few swims like this recently. Rather than hair rigging the meat I bury the hook completely. This means I can plop my bait into one of the weed channels and work it downstream as best I can. There's always a chance. 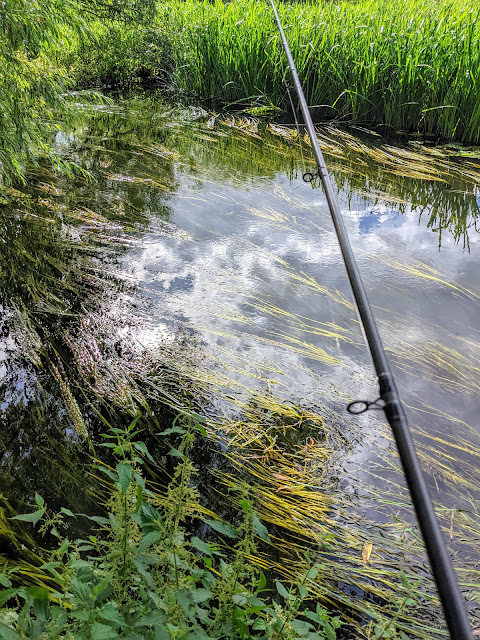 My second session was more rewarding; I had a chub of 4lb 11ozs this way and a second of 4lb 5oz. 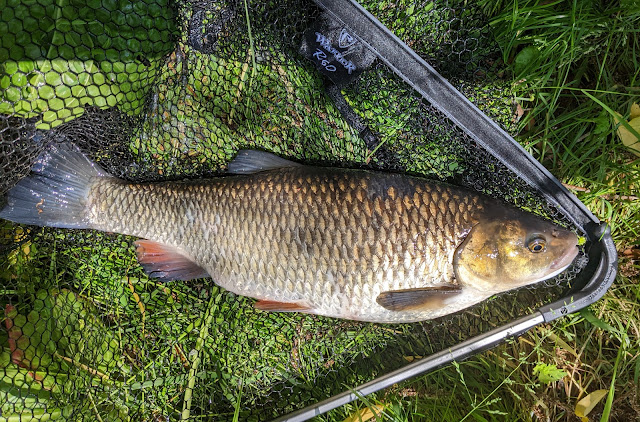 The second chub came from my second stretch of the day and from a very distinctive swim to the locals.
All in all then a half decent start. Still no barbel caught or sighted but those chub captures giving me enough encouragement to preserver a little longer yet. 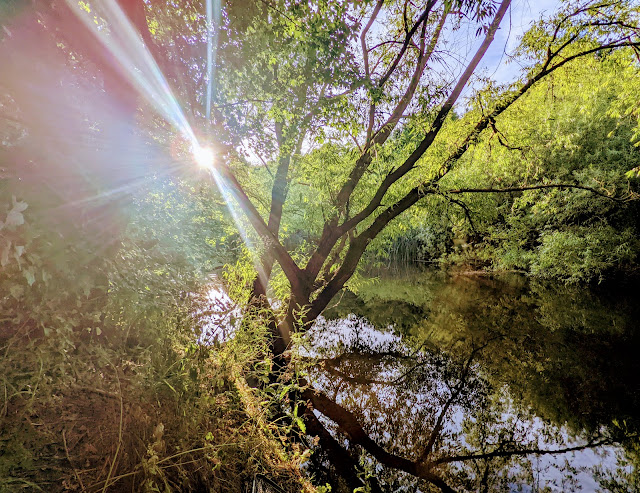 Whilst typing this out I've remembered the job at home I was doing on opening day too. Although this clip is not that actual day I hope it serves to reenforce how seriously I take Health & Safety and the use of proper protective equipment, although my chainsaw trousers and shirt proved too hot to wear so I distilled all that down to just a hat.
Cheers.