Oooh I'm having to dig deep now...I'm racking-up and back-to-backing blanks more rapidly than a snip clinic! And all in the name of trying to catch a river Anker barbel.

I'm my own worst enemy however. No-one is forcing this upon me or making me do it and I'm sure once I'm eventually off the mark I'll chill the fuck out a bit. But with every birthday that passes so does another season and I'm damned if I'm going to be lying on my death bed rattling, "I wish I'd gone fishing more".

In the midst of a blank run the mind does wander however. The allure of tackle items on shelves and on screens beckons you in to the warmth of magnificent trophy shots; a fish feeding frenzy, a guarantee, a taking the UK by storm whispered promise. Before nodding off I've taken to wistfully imagining float fishing pools for perch or using the lightest quivertip rod I own to tempt roach from amongst the slumbering giants of carp.

But snap out of it old chap, wishful thinking never achieved a thing and to achieve the thing you want to achieve you have to be out there with a line in the water. At the end of the day that's probably the biggest differentiator of 'successful' vs 'unsuccessful' anglers.

I was out again at the weekend, Tamworth bound and with most of an afternoon at my disposal. Slightly different approach this time as on my last trip here I'd eyed a straight between two bends where the main flow was towards the far bank and which mellowed nicely as the river drew close to the right bank I was fishing. Yet to have located where the larger fish are lying this presented me the opportunity to fish one rod out and into the main pull and a second closer in amongst the quieter water. Truth be told I'd roughly picked the spot before I left home having kept a close eye on the levels and with the benefit of being able to imagine the stretch having now seen it first hand. 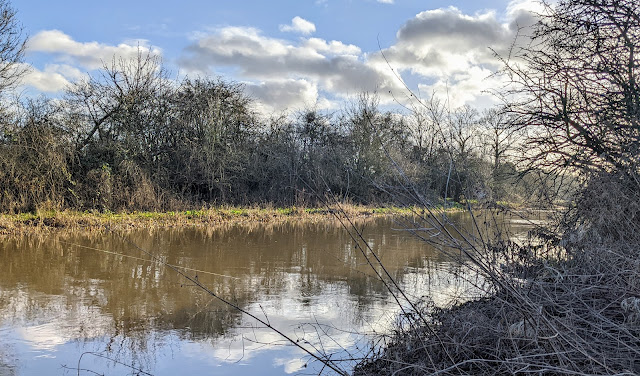 Both rods had flat bottom feeders attached which were repeatedly stuffed with grubs, chopped worm and a sprinkle of hemp. Worms or maggots went onto the hooks.

The first interest I had was from a sock. 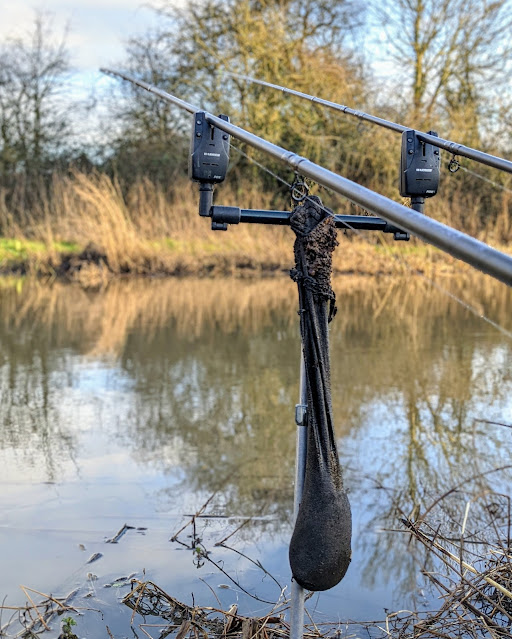 Not wasting any time I got straight back out there before the wardrobe shoal moved and hooked a shoe. 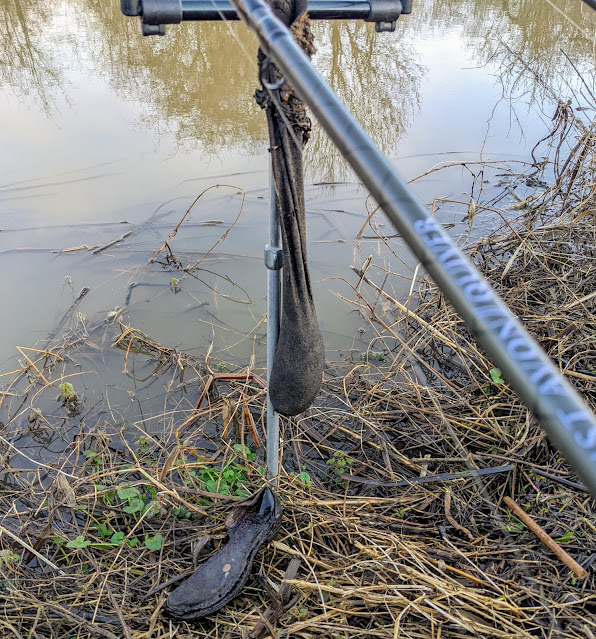 At this point I thought I may have invented a new sport - Cadavering - and was a little fearful of what might turn up next. Thankfully my brace was replete with those two items.

And that was it. That's what happened. No knocks, no touches and not so much as a gentle pluck at dusk.

That was my first full attempt at the static approach here which concluded with flatline feedback. DNR. Maybe next outing it's time to cover some ground again and try to find where the buggers live!?
In other news I caught these local rascals trying to nick our shed in broad daylight the other day. They now all live in my cellar into which a basket of lotion is regularly lowered.
Cheers!